France’s 3Bs are Back

Opimian began as a collective of wine lovers who sourced and imported quality wines from around the world. Bordeaux has been around since the beginning in 1973. And why wouldn’t it be?

As usual, Bordeaux’s left and right banks are fully represented. The wines from our treasured partners Vignobles Darriet are back. New this year, look for the stunning, 5th growth Château Grand Puy Ducasse. As if that was not enough, we have doubled down this year on sourcing some of Bordeaux’s best second wines–which we believe provides the best value for premium wine from Bordeaux estates. Second wines are usually produced from a specific part of the vineyard that is not used to make the estate’s flagship wine. They offer an expression of the property, but with an earlier drinking window and a more accessible price. You’ll find these marked in red for new wines and in copper for wines previously offered. The Bordeaux Instant Cellar was such a hit last year, we’ve done it once again. Louise Wilson, MW has chosen an assortment on page 26 that will have you enjoying every aspect of what Bordeaux has to offer. As many of you have heard, France suffered a tremendously hard frost last spring and similar to 2009 and 2014, we were unable to source a long-time Opimian favourite–Prince Pirate Blanc. Rest assured it will be back next year.

Not to be outdone, our friends at Château Pique-Sègue in Bergerac showed so well at tasting this year, we’ve added three wines to our typical selection. Let’s not forget Beaujolais. Famous in its own right for its wonderful expression of Gamay, each of the ten crus is known for its own, nuanced winemaking. We’ve created four mixed cases so that you can try several of them and find your favourite. For those paying close attention, you will notice we even added a rare Beaujolais Chardonnay.

Grab a glass, pour some of your favourite wines from Bordeaux, Beaujolais and Bergerac, sit back and enjoy! We’re right there along with you. 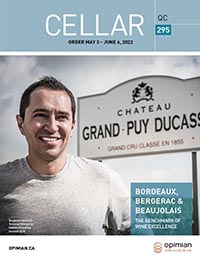 The PDF is now available

Number of bottles in case