Southern French vineyards, bike shorts, and Antarctica. You may wonder how do the three relate? Believe it or not, somehow, they do. Let me try to explain.

Growing up, the cellar and vineyards of Château Canet were my playgrounds. Getting my hands dirty when I could, I loved being immersed in the beauty of nature and learning about the winemaking process. However, seeing forest fires blaze one summer and deadly floods the next, both the power and fragility of nature intrigued me.

Fast forward to 2019, when I spotted a man in a helmet and bike shorts during a brunch in London. Curious, I asked–”Long commute?” to which I was greeted with, “Yes rather, I am training to go South. As far South as one can go. South to Antarctica.” If the outfit sparked my curiosity, Antarctica spoke to the adventurous side of the little girl running around the vineyards. 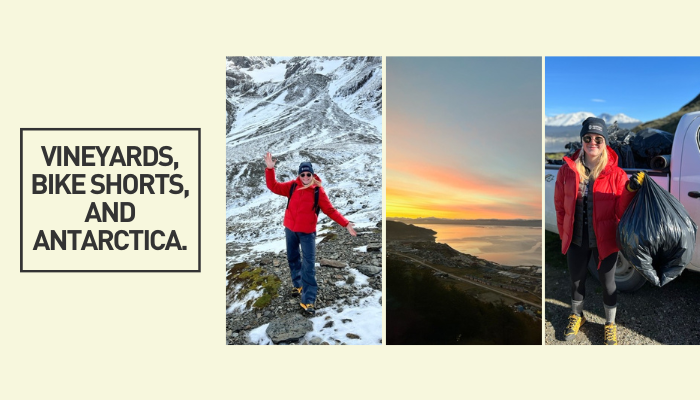 I found myself chatting with Mr. Robert Swan, OBE, and lycra-wearing polar explorer–the first man to have walked to both the North and South poles unaccompanied. He tells me about his life’s mission to preserve and spread awareness about the Antarctic continent. He started the 2041 foundation–2041 being the year that the Antarctic Treaty, currently protecting the continent from all exploitation, drilling, and ownership, expires–in order to raise awareness about the key role Antarctica has to play in the fight against climate change. Bringing an enthralling combination of urgency and hope, I found myself jumping at his offer to join him on his next sustainable Antarctic expedition.

Excited to learn from experts and further experience climate change firsthand in order to come back and share Antarctica’s sustainability story, I started fundraising.

This was a journey in itself!

After emails and calls, of which a few remained unanswered, I proudly reached my goal of 20,000€. A goal that would not have been possible without Opimian and its Members, who kindly sponsored part of my expedition through the sales of the Fleur de Charlotte wines. For this, I raise my glass (I’m particularly enjoying the Sauvignon Blanc right now!) and I thank you all for helping me experience the last great wilderness. I hope that the snippet I am going to share with you now gives you a taster of Antarctica’s magic and vulnerability.

Set to take place in November 2020, the world hit a small bump in the road, and the expedition was postponed 6 times due to Covid-19. Finally, in March 2022, I embarked on a long journey from St Andrews, Scotland, where I study, to Ushuaia, the Southernmost point of Argentina.

In Ushuaia, I met the team I would spend the next two weeks with. One hundred fifty people from 36 countries spent 3 days getting to know each other while doing a beach clean, collecting 20 bags of washed-up rubbish and microplastics, and hiking up the Martial Glacier, Ushuaia’s only, and decreasing freshwater source. 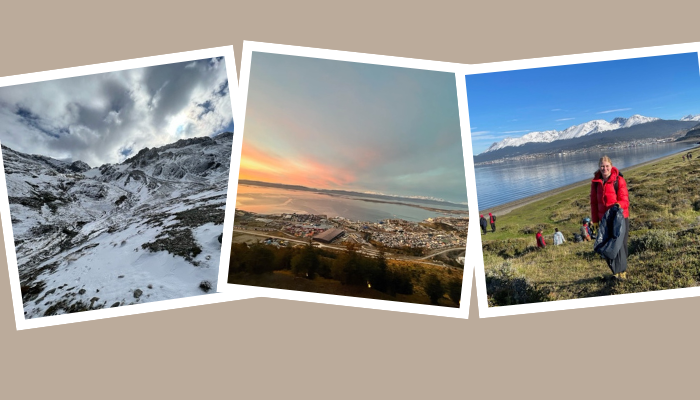 Finally, we boarded the Ocean Victory, a 2021 ship that is 60% more sustainable than any other ship in its industry, thanks to its Tier 3 engines which give off 80% fewer emissions, and 2 of 6 engines being electronic!

The infamous Drake Passage begins–the 1000 km stretch between South America and Antarctica and the meeting point of the Southern and Pacific Oceans. In other words, the roughest seas in the world. This is no understatement. The treacherous journey South, marked by 10-metre waves and waking up on the floor after rolling out of bed, made the inhospitable Antarctic sound very welcoming.

To remedy the inevitable dizziness that comes with these conditions, we had lectures on Antarctica’s unique ecosystem, its history, evolution, interdependencies, and how these have been impacted in so many ways by climate change. We also spent significant time on climate change scenarios and some of the many initiatives being undertaken to adapt and mitigate its impacts.

On the evening of March 21st, we reached Antarctic waters. Despite not seeing land yet, the immediate temperatures drop of 3°C and snow falling on deck made for an atmospheric entrance.

When out on deck the next morning, Robert’s “Layers! Layers! Layers!” suggestion was taken very seriously. The bitterly cold wind would seep through any open gaps- and being on deck was a must, as the continent would soon be visible.

‘Visible’, however, is arguable as we arrived in a whiteout. Wind blowing, snow falling, you could not see your hand stretched out in front of you. Though it was a rather momentous arrival, as the next morning we woke up surrounded by steep cliffs and glacier edges powdered in snow from the previous night.

And so the Antarctic expedition began! Short nights and busy days, we made the most of our time down South. This is what a typical day looked like:

On our first morning, we carried on South, navigating a passage of water between Graham land and Booth Island called the Lemaire Channel, nicknamed the “Kodak Gap” by some as it was deemed one of the most photographic parts of Antarctica. Dramatic steep-sided cliffs hemmed in the iceberg-filled passage which was about 11 km long.

Lemaire Channel took us to Pleneau Island. Our first continental landing. Sun shining and water glistening, one would not think ‘Antarctica’. However, within 30 minutes of exploring the shoreline, observing penguins go about their daily routine, grooming, waddling, and slip-and-sliding on the ice, the reality quickly set in. Catalytic winds swept us off our feet. These masses of cold, dense air sitting over the elevated Antarctic plateau–the center of the continent–flew down towards the lower coastline. The rugged landforms and glaciers funnelled the airflow, meaning that by the time it hit the coastline, it was roaring! Holding onto my neighbour and crouching down for stability, Antarctica’s ‘inhospitable’ description all of a sudden felt very real. Within another 15 minutes, peace had been restored. Glossy waters, blue skies, and waddling penguins. I was stunned by the rapid turn in conditions, and the sheer power of this immense place. Far away from the impacts of our daily lives, we lead, yet are still vulnerable to the climatic changes we create.

As the days passed, the continent’s beauty and secrets kept revealing themselves

Perhaps the most moving moment of the expedition for me was our day spent at Deception Island. Located just north of the Antarctic Peninsula, Deception Island was a hub for the whaling and sealing industry in the 20th century. This marked the spot where in the name of progress, humanity wrought havoc over sea lion and whale populations; to the point of near extinction. Since the 1970s, however, whaling has been forbidden by law, and Deception Island’s remaining ruins, its peace of life, and the flourishing of the then hunted species serve as lessons across generations. Progress has many facets: some destructive and some hopeful and regenerative. Looking to the future let us continue with the latter option!

During the two weeks, we were there, the continent did not cease to surprise us. Unfortunately, not all surprises were welcomed with such awe and wonder as the wildlife and scenery. On three occasions, mother nature gave us all a wakeup call:

It rained! Antarctica is a desert, meaning precipitation of any kind is rather rare–let alone RAIN. Indicating warming temperatures, and seeing rain instead of snow in one of the coolest climates was a shock. Not least as I later found out it had been snowing in the Canet vineyards at the same time. Rain in Antarctica and snow in the South of France–I was perhaps on the bottom of the globe but this very much felt like the world had been turned upside-down.

Upon docking back in Ushuaia and reconnecting with the world, our phones started buzzing with all sorts of notifications. One of which was a news alert that the Conger Iceshelf–an ice mass the size of Rome–had collapsed off the Eastern part of the continent, and was now floating at sea, melting away faster than ever.

The second news alert that stood out was the headline ‘Scientists in East Antarctica take a bare-chested group photo as temperatures soar to 40°C above normal at remote station’. Bare-chested in Antarctica? Well when temperatures reach -11°C instead of the usual -50°C, why not? The Concordia research station in Eastern Antarctica recorded a record spike in temperatures. 40°C warmer than ever before!

The Antarctic is an incredibly beautiful but harsh environment. 70% of the Earth’s freshwater is locked away in its ice. It is 14 million square kilometres. It is a land that has never known war, does not belong to anyone, and is free from exploitation. Magic, beautiful, pristine, peaceful, yet hostile, fierce, and unforgiving land, both massive and humbling. And despite being untouched, it is a land that is vulnerable to our actions far away. For instance, if the entirety of Antarctica melts, sea levels would rise globally by 60 metres. And that is just one impact, not considering the shifts in wind patterns and ocean currents, both affecting the frequency and severity of natural disasters, not to mention the huge amount of human displacement this would cause.

Now, it’s not all doom and gloom I promise! Take our evening speakers’ corners for instance–put like-minded sustainably driven and motivated change makers in a room, and ideas spark. My grandmother used to say, “nothing good happens after midnight”. However, when on a ship in the middle of the Antarctic, this rule didn’t seem to apply. The late-night debates are when all the brilliant ideas surfaced! The social capital onboard the ship was so incredibly stimulating. Learning from experts and fellow participants, our evening debates fostered ideas, solutions, and a sense of hope amongst the urgency of climate change.

And with this, I leave you with a challenge: to create hope, and in doing so to take action! I challenge you to a 1-month, a 6-month, and a year-long change. Be it from only buying vintage clothes, to starting a compost, biking to work, switching to an electric car, collecting rainwater, to getting your business B-Corp certified. It is not about one person making a big change but lots of us making little changes. So however small or drastic your initiative may be, I challenge you to do your little bit and help preserve our last great wilderness–Antarctica–and by extension to preserve our amazing planet (that includes vineyards and God forbid we don’t have wine!)

Cheers to you Opimian Members, and thank you for joining me on my expedition to Antarctica.