On my trip to South Africa last year, I was struck not only by the quality of the wines, but by the shining examples of Cape wine companies when it comes to the United Nations’ Sustainable Development Goals.

The UN agenda is wide ranging, covering 17 Sustainable Development Goals with 169 targets which fall into three dimensions: economic, social and environmental. Basically, all human beings should enjoy prosperous and fulfilling lives, and economic, social and technological progress should occur in harmony with nature.

Grape growing and wine production started in South Africa after the Dutch East India Company established a trading post in Cape Town under Jan van Riebeeck, who planted the first vines there in 1655. The centuries that followed saw colonisation, invasions, migrations and wars. Apartheid was implemented in 1948 with racial segregation, forced eviction of native Africans from urban centres, discrimination, violence and denial of human rights. This lasted until as recently as 1994.

My first ever visit to the Cape was in the early 1990s. I am sure anyone who has been there will agree—it is a most beautiful region. Mandela had just been elected, people were jubilant, looking forward to an outward-looking future, free of trade embargos, discrimination and combatting historic inequalities. In my visits to wineries, I came across very few Black Africans or Coloured people at all, let alone in senior positions*. After decades of discrimination, Black Africans in particular had little or no formal education and lacked confidence. Behaviours and attitudes were engrained even in the White Africans who wanted change. Grape and wine production and sales had been controlled by the KWV (Koöperatieve Wijnbouwers Vereniging van Suid-Afrika, Afrikaans for Co-operative Winemakers Union of South Africa) up until 1990 with a focus on brandy production—less than 30% of the grape harvest was used for wine. There were issues in the vineyards with virus-infected plants and wine quality generally needed to improve.

Today, the population is around 57 million people made up of 80% Black, 9% Coloured, 8% White and 3% Indian/Asian*. Positive affirmation actions and Black Economic Empowerment programs have been introduced; yet many, mostly black South Africans, still live in poverty and many others are frustrated by the pace of progress. Yet, I have seen progress on each and every trip to the Cape. Wineries are involved in organizations such as Fairtrade, which ensure farmers and workers are receiving a fair price with a premium, which is then invested in education, sanitation and health care for the community. 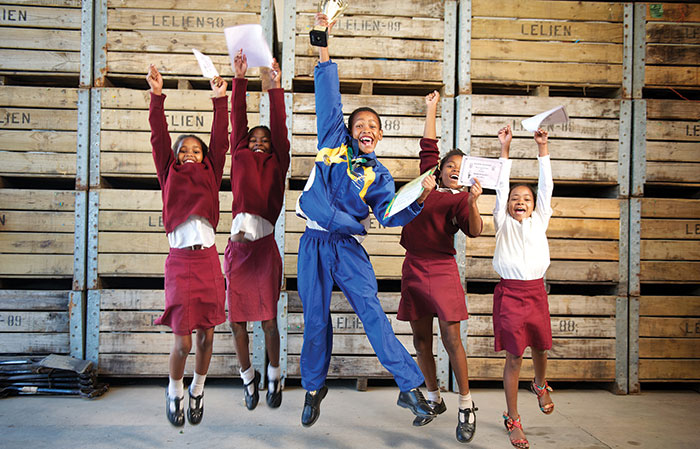 Last year I met white South African Petrus Bosman, whose family have resided at Lelienfontein since 1798. Under Petrus, the Adama Apollo Trust was founded in 2008. It has transferred a 26% share of the business to the farm employees—the largest land reform in the wine industry to date. I saw first-hand tangible benefits of the trust while visiting its school, which looks after 200 pupils. The trust also provides medical care, organises transport and a host of sports, cultural and community activities for the workers and their families. I spoke with Rita Andreas, a Coloured lady, born and raised on the farm, and I realised that it is more than these tangibles that are important. It is the inspiration, the encouragement and the opportunities that are given by the likes of the Bosman Family. Rita was a general worker who moved up to employment in the office. Having seen her potential, she was given more responsibility and worked her way up to become the Head of Human Resources and subsequently Chairman of the Adama Apollo Trust. She is now a local elected councillor. Her next goal is to become the Minister of Agriculture for South Africa. I wouldn’t be surprised if one day she becomes President!

South Africa also has a strong environmental policy. The Cape winelands are on some of the oldest viticultural soils in the world. The Cape Floral Kingdom is the earth’s richest and most biodiverse region, with over 9,500 plant species alone. South African producers have set aside 144,000 hectares as conservation land. Climate change, its impact on water resources and mitigation are other issues the industry is confronting.

While dealing with all these challenges, South African wines have increased in quality beyond measure. Vine health has dramatically improved, with many more world-class wines being produced. All in all, the South African wine trade has much to be proud of as a force for good and a demonstration of what can be achieved if there is the will. As I sip my next glass of South African wine, I will not only enjoy the wine but will think of the power of positivity and how we can all make a difference.

*In South Africa, the various ethnic groups are known as Black, Coloured, White and Indian/Asian. These are not considered derogatory terms within the country.