Norway has a long tradition of independent craft distilleries.

Before Norway’s 1917 prohibition, there were over 10,000 registered distilleries, but a ban on liquor also meant the end of local hand-crafted distilleries. A state monopoly was introduced in 1927 and industrial liquor production dominated for the next 80 years.

Established in 2015, Oslo Handicraft Distillery was founded by three highly experienced members of the beverage industry: Marius Vestnes, Marcin Miller and Martin Krajewski, who Opimians will recognize as the man behind Château Séraphine, Clos Cantenac and Aristea Wines. The local team of four all have aquavit and spirits in their DNA. 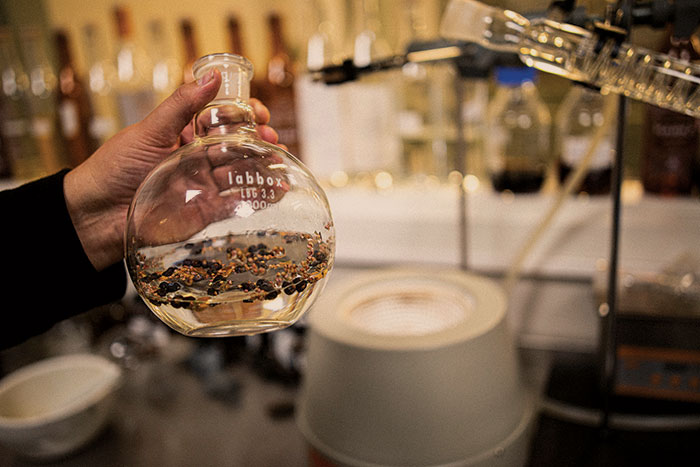 Oslo Håndverksdestilleri stems from love for the Nordic outdoors, clean air, lakes, cuisine, design, and the country’s heritage of craft distilling. “We do follow the dogmas and rules of neo-Nordic cuisine. As we only use botanicals native to Norway we go into uncharted territory for spirits,” says Frederik Dahl, Sales and Market Manager. “A good example of the reflection of these flavours is the Vidda Tørr Gin, the first gin in the world made without citrus. All the botanicals in it have a long local tradition both as medicine and as ingredients in spirits,” mentions Matt Ensor, the winemaker-turned-distiller. For those who want to try something different, the distillery’s Akevitt (aquavit) is made in the same manner as the gin, with carraway instead of juniper. Their potato-based vodka is also distilled with botanicals, and when Oslo developed it to drink, they mixed with tonic and in a martini.

Earlier this year, Oslo Håndverksdestilleri brought home the prestigious award of Grand Master from the Global Spirits Masters. Vidda Tørr Gin took home The Master medal in two categories. The Norwegian Wood Birch Vodka and OHD Akevitt each received a gold medal. “Winning the gin master title for a product like Vidda Tørr Gin, made with only botanicals native to Norway, in the biggest gin competition in spirits is amazing. It has given us a boost of confidence and interest in the product. When we later won a Master for our Akevitt, the first ever for an aquavit, we really had proof that we are doing something special and people are starting to notice it,” says Frederik. Who would have thought that this little distillery could rub shoulders with some of the world’s biggest players like Diageo and Pernod Ricard?

This is the first time in North America that their gin, vodka and akevitt are offered and Opimian is proud to make them available to you.

Order these spirits from Norway through June 7, 2021 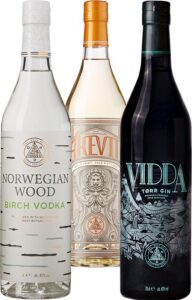