On the Diversity of Spain

Spain produces a wide variety of wines from light, low alcohol, crisp whites to the rich sweet fortified wines of the south, and everything in between. The diversity arises as much from Spain’s history as from differences in regional geography and terroirs.

Spain’s wine history dates back to around 1100 BC when Phoenicians colonized the Mediterranean but was rudely interrupted for centuries under Moorish rule. In the Middle Ages, wine production was revived by Christian monks and since has seen periods of ups and downs linked to the Spanish Civil War and rule under General Franco. Today, Spanish wine is most definitely on an upward curve and is one of the most exciting places to explore.

After France, Spain is the second-largest country in Western Europe and boasts more land planted to vines than any other country, although low yields mean it ranks only third in wine production volume. The Iberian peninsula is formed by mainland Spain and Portugal, and is almost fully surrounded by ocean and sea. Spain’s geography is dominated by a central plateau – the Meseta – which covers much of the country. The plateau tilts south and west with an average altitude of 600 metres. making Madrid the highest capital city in Europe. A series of mountain ranges – sierras – include the Pyrénées which form the border with France, the Cantabrian Mountains in the north and the Sierra Nevada in the south-east. Rivers play a starring role in wine country, with the Ebro flowing from the north through Rioja and Navarra into the Mediterranean sea. Rivers Tajo, Duero and Miño flow through Portugal and like the river Guadalquivir in Sherry country empty into the Atlantic.

Spain’s diverse wine terroirs are a result of the relative influences of the Atlantic, the Mediterranean, local rivers, as well as surrounding mountains and their altitude. 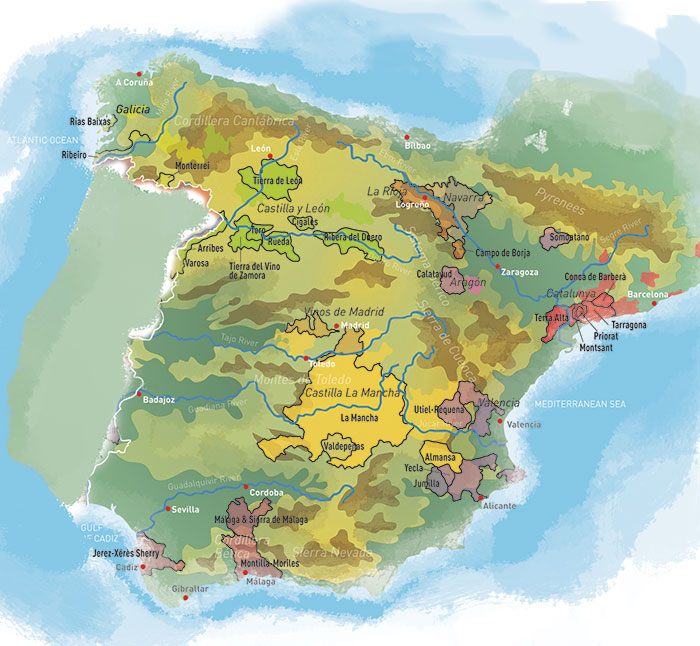 The north of Spain, known as Green Spain, is where the influence of the Atlantic Ocean dominates. Rainfall is high, temperatures are low with frequent incoming fronts blowing in from the Bay of Biscay. It is difficult to ripen grapes in the coastal Basque region around Bilbao and San Sebastian. Local grape varieties resistant to disease produce relatively low alcohol wines with tart acidity and some spritz. The northwest corner that sits above Portugal is also exposed to the vagaries of the ocean, wind and rain, although the further inland we go, the lesser the impact. Rias Baixas, closest to the coast, is known for its crisp whites made from Albariño that pair perfectly with the local seafood. Further inland, Godello is planted for whites along the twisty hillside banks of the river Miño in Ribeira Sacra and in Valdeorras. Both also produce quality red wines from the Mencia grape.

In Rioja, the impact of the Atlantic Ocean is tempered by the Cantabrian Mountains that lie between Spain’s most famous wine region and the coast. The impact is a significant drop in rainfall, to the extent that drought can be a problem! Rioja DOCa vineyards stretch for 140 kilometres of the Ebro Valley as it runs from the mountains south-eastwards to the Mediterranean sea. The climate in the southeastern part is significantly warmer as the Mediterranean influence increases and a higher proportion of Grenache is planted there. Tempranillo, however, remains the dominant grape. Rioja wine styles were heavily influenced in the 19th century when négociants from Bordeaux came knocking as the Phylloxera pandemic had devastated France’s vineyards. Rioja wines became known for their distinctly oaky coconut flavours and light body.

Ribera del Duero wines are also based on Tempranillo, locally known as Tinta del Pais, yet its wines are very different. Its vineyards in central northern Spain are located on the plateau, up to 850 metres in altitude on either side of the Duero River. Ribera del Duero has a more extreme continental climate with hot summer days and temperatures reaching 40°C, followed by cold nights, thus producing concentrated, firmer and more savoury red wines than Rioja. As the Duero River continues its journey westwards, Tempranillo has adapted to an even more extreme climate in Toro DO where it produces small thick-skinned tannic berries known as “Tinta de Toro”, and meatier, more rustic wines. Neighbouring Rueda is known for its dry white wines produced from Verdejo, and more recently, Sauvignon Blanc.

Spain’s signature sparkling wine, Cava, is mainly produced in Catalonia in the hills behind Barcelona. Macabeo, Parellada, Xarello, Pinot Noir and Chardonnay are cultivated on limestone hillsides under a warm Mediterranean climate. Taking inspiration from the Champagne region in the 19th century, the same winemaking techniques are used. Catalonia also produces highly concentrated alcoholic reds in the Priorato hills, with more restrained reds and whites in Penedès and Conca de Barbera. Like many other regions, there is a revival of indigenous grapes such as Trepat.

Southern Spain is hot and dry with chalky white soils. Palomino grapes are used to produce world-class fortified sherry wines – from pale dry Finos and Manzanillas, whose taste is due to the development of a veil of flor yeast during maturation, to the dark, rich and nutty-tasting Olorosos. Sweet, dark, thick, treacly wines are also made from Pedro Ximénez (PX), not to mention solera aged brandies from Jerez.

Spain is indeed an exciting wine country to explore!