Italian Grapes | The Sweetness of Life

Heirs to the long-ago Roman Empire, Italians have never ceased to gift the world beyond with their unrelenting passion, energy and creativity.

Ever since the Renaissance, Italy has been birthplace to all things that characterize Western civilization at its best—in the sciences as in the arts. In fact, what we refer to as “modern history” is generally considered to have begun in 16th-century Italy.

Today, Italy’s most commonly agreed contribution to global culture has been its unwavering good taste, almost as if Italians invented it. Their love of food, drink and the company of others is perhaps best expressed by the universally recognized words la dolce vita.

“The sweet life”. On those special occasions when we cook for friends, family or both; when we take our seats at the table, break bread, and work a corkscrew into a cork, we’re doing what Italians do just about every day.

As old as its culture may be, as countries go Italy is young. Not until 1870 was the loose agglomeration of states huddled on “the boot” united under a single government, leaving a diverse viticulture that remains quite localized, even within such a relatively small geographic area. Add to that the climatic differences between northern and southern Italy, plus the magnificent island of Sicily and you easily have the most exciting wine menu in the world.

A dark-red fruit native to central Italy, Sangiovese grapes—historically associated with Tuscany—mix well with Cabernet Sauvignon and Merlot. Richly coloured, Sangiovese also takes on the flavours of the barrel, although less aromatic than its cousins. It pairs well with lamb and red meats.

Glera, also known as Prosecco, is a white grape descended from central Europe. Wines are usually sparkling and identified with low-lying Venice, although the vines are tended on the slopes of higher altitudes south of the Dolomites. An excellent accompaniment to a lazy brunch. 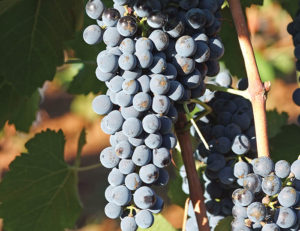 Red Primitivo grapes, also referred to as Zinfandel, are very dark-skinned, ripening early in the vineyards of south-eastern Italy. Their wines are bold and potent, but seldom aged long, earning them a reputation as a “hard wine.” They pair well with meaty pasta or savory bacalao.

The red Nebbiolo grape is central to all red wines from the Piedmont region. Its product is smooth and deeply coloured. Grown at the foot of the Alps, Nebbiolo vines rest in their native cool and dewy climate, but burst forth during the hot summers. Nebbiolo wines enjoy a reputation for aging gracefully.