Kevin Mintenko and Simon Litherland have been Opimian Area Representatives for the Vancouver and Lower Mainland Regions of British Columbia since 2013.

The story starts in a 14-seater van, in the Oliver-Osoyoos wine region of British Columbia, way back in 2013. Along with the driver, we were the only human occupants of the van—however that was not to say it wasn’t full. Thus began our wine collection, and the birth of our passion.

Never ones to shy from a challenge, or new experience, we jumped in with both feet. Our cellar quickly surpassed 500 bottles, and we began hosting wine parties with friends. To continue learning about wine, and expanding the diversity of our cellar, Simon and I joined Opimian in January of 2017, and became Area Reps not even a month later — continuing our trend of jumping in with both feet.

We held our first Opimian event in June of that year, titled “Evolution.” At the event we took the chance to meet many faces within the Club, and directly hear from members how they wanted the chapter to evolve. In the last two and half years we have seen a lot of evolution with Opimian, our chapter, and ourselves!

During this time we have had amazing opportunities to travel to several countries, and New Zealand has found a special place in our hearts. Simon’s sister and brother-in-law made the move to New Zealand from the UK a few years ago, and after the birth of their first child, his parents were not far behind. On November 20th our niece was born, and we decided that now is the right time to make the move ourselves. We have made great connections in the wine industry and once we are settled, look to pursue our passion by becoming more hands-on in the industry. Perhaps someday soon, you will see us working with an Opimian supplier! 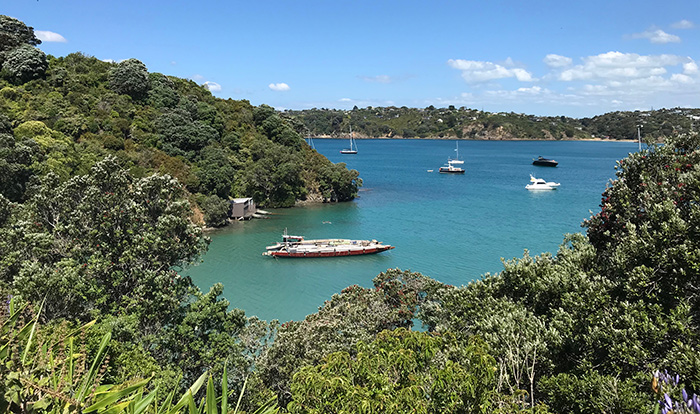 We have been particularly fond of the time we spent in Napier, on the east coast of New Zealand. This area, Hawke’s Bay, is known for hot, dry summers with a long growing season. This area produces some fantastic reds, particularly Syrah. Sam Harrop’s Grand Amateur label sources its grapes from vineyards in Hawke’s Bay, though the wines are produced on Waiheke Island. His wines showcase the elegant and complex side of the region — a must try.

On our last trip we had the immense pleasure of meeting Daniel Struckman, who assists Sam with the production of his wines, and also has his own label. The production facility on Waiheke Island is owned by Thomas Bach (whose label The Batch, is also made by Daniel). It has an incredible restaurant and boasts amazing views of the island and surrounding bays. Well worth a visit! We certainly recommend checking out Sam Harrop’s Waiheke Island Chardonnay — we served the 2015 vintage at our wedding, so what better endorsement can you expect? — currently available as lot 1551. Don’t be put off by the price, as it is worth every dollar.

Daniel is moving the vineyards toward organic practices, including the use of raw eggs mixed int the soil to ward off rabbits. His holistic and careful approach to vineyard management and winemaking is evident in all of the labels he produces, but is especially noticeable in his own “Daniel Struckman” wines. We highly recommend his Pinot Gris, currently available as lot 1554. We got to sample last year’s vintage straight from the tank, and we were instantly impressed. It has more depth and interest than you would expect from an average Pinot Gris, with a beautiful savoury edge.

We have been so grateful for the support of the Head Office Team, and our Chapter Members — especially those who joined us at so many events. We really could not have done this without you.

We extend a warm invitation to all Opimian members to keep in touch with us via our new blog, FoundandFermented.com, and to let us know if you are in New Zealand. We would be happy to introduce you to some of the sights, and sips, that have captured our hearts.