Go Organic? One Size Does Not Fit All

As wine drinkers, we increasingly desire not only wines that taste great, but ones that also fit within a healthy lifestyle. Wine producers want to consider the land they farm, protect their families and wildlife from chemical sprays, and encourage biodiversity. But are the good intentions all they are cracked up to be? And if so, why aren’t all wine producers going organic?

In the 1970s, vine growers started to notice the negative impact the heavy use of agrochemicals was having on their soils. As a response, the basic philosophy of organic farming introduced the elimination of the use of agrochemicals—pesticides, herbicides, fungicides and chemical fertilizers used in the vineyard. I italicize that word, because it would be wrong to say that organic farming doesn’t use any chemicals at all. It is nearly impossible to produce quality wine grapes with no treatments.

Each wine region, depending on its geography and climate, has different pests and disease pressures, making it easier to practice organic viticulture in certain regions, such as those with warm, dry climates. The two fungal diseases that are common and the most problematic to most regions, however, are downy and powdery mildew. Both need to be controlled in order to yield a decent crop in terms of quality and quantity. In organic viticulture, copper-based sprays are used against downy mildew and sulphur is applied at regular intervals in the vineyard to reduce powdery mildew.

There is no international standard for organic viticulture. Many bodies exist, such as Agriculture Biologique in France, or the USDA’s NOP (National Organic Program); each has a slightly different set of rules and regulations to adhere to. All permit the use of copper and sulphur-based treatments, within limits, on the basis that these are natural elements rather than synthetic, industrially produced compounds. But natural does not necessarily mean harmless—think arsenic. One of the issues is that over time, copper can build up in the soil to toxic levels, thereby affecting biodiversity. Phosphite, an alternative to copper, is permitted for organic viticulture in Germany, but not by Agriculture Biologique in France. 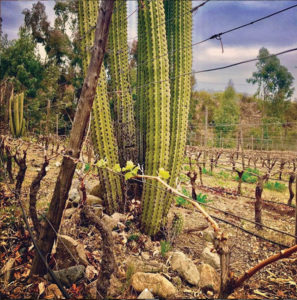 Wines have an added layer of complexity compared to organic fruits and vegetables, as grapes are fermented into wine. There is a distinction between wines made from organically grown grapes and organically made wine. Organic wine certifications take into account details like yeasts and the amount of sulphur dioxide that can be used to protect wines against oxidation and spoilage. In the past, the no/low use of sulphur dioxide in the winemaking process led to the production of off flavours. Organic wines were synonymous with faulty wines. Today, organic winemakers are much savvier.

In a humid climate such as Bordeaux, where downy mildew pressure can be high, the spraying regime for organic viticulture may require double the number of tractor passages through the vineyard, which in turn affects compaction of the soil and increases the carbon footprint of the vineyard through the increased use of diesel. Agrochemicals also contribute to the carbon footprint through emissions from their industrial production, distribution and delivery to the vineyard.

Today vine growers and winemakers have much to consider. It is not a simple one size fits all. Winemakers adopt a sustainable philosophy and have to respond to whatever conditions Mother Nature throws at them. For some, this will be organic, but organic is not suitable for all. The goal must always be to produce the best wines possible.