The mere mention of the word Champagne tells a story; the story of a wine that has travelled the world in a few centuries to become a symbol of pleasure and sharing; a unique wine that cannot be ignored!

Located in the north-east of France, 150 kilometres from Paris, the Champagne vineyards extend over some 34,300 hectares, encompassing 319 distinct Crus. Seventeen villages boast the “Grand Cru” designation and 42 the “Premier Cru” designation. Romans were the first to introduce the vine to Champagne in the 2nd century.

The star of the region is, of course, Champagne, strictly protected by an Appellation d’origine contrôlée (AOC) and by the CIVC (Comité interprofessionnel du vin de Champagne), one of whose cofounders is none other than Maurice Doyard, the great-grandfather of our winemaker Carole Doyard-Mahé. 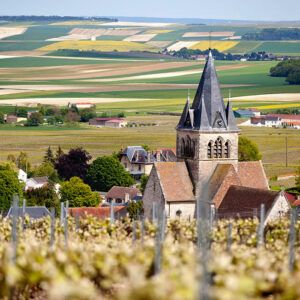 There are several versions of the discovery of champagne. Wine effervescence is a natural phenomenon that has been known since ancient times. However, it is particularly noticeable in the northern region of Champagne, where until very recently, the harvest took place in October. The cold of winter blocks the fermentation of juices, and when fermentation resumes in spring, while the wine is bottled, the carbon dioxide can only be released when the bottle is opened.

At first, the people of Champagne tried to keep this sparkling phenomenon from happening, as it was considered a defect, but given its success, particularly with the king’s court and the aristocracy, they developed the process through a series of technical innovations aimed at understanding and controlling this natural effervescence. Dom Pérignon, a wine master and monk from the Benedictine abbey of Hautvillers, is said to have played a key role in developing the process. Very quickly, the “devil’s wine” conquered Europe, America, Russia and China and is now exported all over the world!

Today, the hillsides, houses and cellars of Champagne are inscribed on the UNESCO World Heritage List in recognition of the singularity of the land, the know-how and the techniques that are specific to the Champagne region. 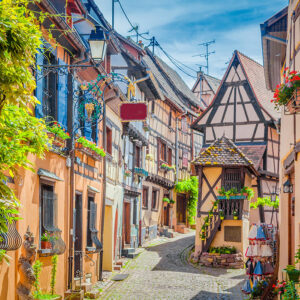 A trip to Champagne

Reims, with its prestigious historical heritage, owes its reputation to its Champagne but also to its cathedral, whose construction began in 1211. For nearly 1,000 years the cathedral witnessed the coronations of the kings of France, which greatly contributed to the prestige of the region and its development.

You will not want to miss the famous Avenue de Champagne in Epernay, known as the birthplace of champagne. With nearly two million visitors each year, this iconic avenue is home to several major Champagne houses. As you leave Epernay, make a stop in Vertus, a vineyard listed as a Premier Cru, in the “Côte des Blancs” and visit our partner Carole Doyard-Mahé, who will welcome you into her beautiful family home.

Feel like visiting the Champagne vineyards? Why not! Just take the Champagne Route! With six different routes stretching over more than 600 kilometres, the Champagne Route allows you to travel through beautiful landscapes where many winemakers welcome visitors and share their passion for their land and their products.

By bike, motorcycle, car or even camper, each itinerary offers great ways to know more about these magical bubbles. But just to be on the safe side, save the bubbles for the end of the day as the roads and streets in and around the villages are very narrow.

The Champagne Route, entirely signposted, winds between vineyards and hillsides, and around picturesque villages, castles and churches. You will be amazed by the scenic views of the vineyard and the charming villages. Enjoy the tour!