Bordeaux is undoubtedly a major wine capital, but it is also a city known for its gastronomy, home to several of the greatest chefs, such as Joël Robuchon, Pierre Gagnaire and even Gordon Ramsay, who have all played a part in reinterpreting the region’s culinary traditions. We would like to thank Romain Gruson, DipWSET, Certified Trainer from the Bordeaux Wine School, teacher at the ITHQ (Institut de Tourisme et d’Hôtellerie du Québec) and President of the Cercle du vin, for his cannelé recipe.

The nuns of the Annonciades convent, located near the port and the famous Place de la Bourse in Bordeaux, prepared this delicacy up until the French Revolution. They collected wheat that scattered across unloading docks, as well as egg yolks from the Quai des Chartrons cellars. Eggs were used to fine tune tannic red wines at the end of vinification, but in this case only the whites were added, leaving three to eight egg yolks per barrel for the nuns to fetch.

Just adding a little vanilla and rum to the recipe creates a dessert reminiscent of trips to faraway islands, such as Madagascar or Guadeloupe.

A young Sauternes, like the one from Château Fontebride, served cold, makes a perfect complement to cannelés. Try this classic recipe of 15 portions, adding or reducing the amount of rum to your liking. 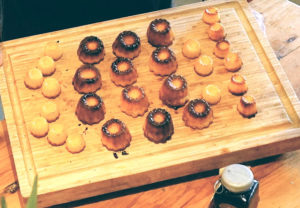 3-Stir in milk mixture and rum until smooth.