Beaujolais is one of the most widely consumed red wines in the world. Perhaps that’s because it’s unabashedly simple, highly refreshing, delicious and completely food friendly.

Most wines require some thought before being paired with foods. Beaujolais says “bring it on.” The unique winemaking process (carbonic maceration, look it up) yields wines of immense freshness, bursting with berry aromas and flavours, round in the mouth, full bodied; but without any heavy tannins to tire the palate.

Beaujolais and its robust neighbour, Beaujolais-Villages, bring joy to the palate and to the dinner table, rather than hushed tones discussing minerality to a backdrop of Mahler. Beaujolais is a wine to chill lightly, pour freely at holiday gatherings, buffets and banquets, or just to enjoy with free-spirited friends.

From the earliest days of Roman expansion, armies of soldiers plowed roads through France as they moved north to Gaul. They ordered the clearing of land and the planting of olives for oil, barley for bread and vineyards for wine. Just north of Lyon, in the district called Beaujolais, only the Gamay grape flourished, and it survives to this day.

The southern half of the region is gently rolling, with chalky and marly clay river deposits that yield wines of lush aromas, and charming fruit to be consumed within a year or two.

The northern half becomes much hillier, with distinct pockets of porphyry, granite, and manganese: these are the terroirs where ten special Beaujolais Crus offer more depth, complexity and a bit of longevity.

Each has its own idiosyncrasies: some are bolder (Moulin-à-Vent, Chenas, Morgon), some fruitier (Brouilly, Côte de Brouilly), some more velvety (Fleurie, Juliénas, Saint-Amour), and others perfumed and delicate (Chiroubles, Regnié). And each is wonderful in its own right.

Beaujolais Nouveau (a.k.a. Primeur) is the annual first taste of the vintage. It’s something to be truly excited about…for, maybe, fifteen minutes. Nouveau is like the introductory chapter to a good book, attention-grabbing and engaging, but what follows is bound to be more interesting and fulfilling. Once you’ve had a bottle of Nouveau (best consumed in the six weeks before New Year’s Eve), it’s time to move on to the more serious Beaujolais of the region.

Get these Beaujolais beauties, available through June 7, 2021 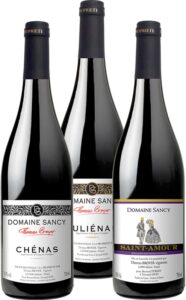 Konrad Ejbich is a writer, broadcaster, teacher and taste-meister. His articles have appeared in Wine Spectator, Decanter, Meininger’s Wine Business International and numerous Canadian publications. At the beginning of his career, he won the Nouveau race to Canada three times.