Back in Time to Bordeaux

It never ceases to amaze how closely the history of wine runs parallel to the history of the entire Western world. Its epic journey has, in fact, been relentlessly westward, starting from its birthplace in Asia Minor and then into the Middle East, whence it followed Phoenician trading routes to encompass the entire Mediterranean world.

Although viticulture had arrived on the Italian peninsula via the Greeks many hundreds of years before, it wasn’t until the second century B.C. that Romans imported modern wine-making and storage techniques from Carthage (Tunis in modern-day Tunisia), just as the Western Roman Empire was in full expansion. So popular did wine become throughout Europe that vineyards were planted anywhere propitious to satisfy the thirsts of local Roman governors, troops, their subject populations and even slaves, who were kept obedient by a gourd or two of their own.

This is how the biggest and most perennially successful wine-growing region in Roman Gaul became the area north and northwest of the commercial port city of Burdigala. Today known as Bordeaux, it is situated on the Garonne river, which flows, along with the Dordogne, into the Gironde estuary.

It was the direct access to the sea that made wines from the region so exportable and well known, first to Roman Britain and later on to 12th-century England, when the French and English were briefly conjoined through England’s acquisition of the territory of Aquitaine, only to fall apart later during the Hundred Years War.

THE PERENNIAL SUCCESS OF BORDEAUX WINES

Despite many setbacks (and a few near extinctions), the vineyards of Bordeaux have been in continuous production for 2000 years. But it’s the variety of elevations, soils and resulting micro-climates that give Bordeaux wines their huge appeal. There’s always something new to discover.

The overall climate of the region is described as oceanic, bordering as it does on the Atlantic, but with high and low temperatures well timed throughout the growing season, resulting in small, intensely flavoured berries. The soil is generally limestone, rich in calcium, and the topsoil gravelly. Almost all Bordeaux are red, with brief excursions into whites and rosés.

The majority of reds are Merlot and Cabernet Sauvignon blends, one dominating the other, although you’ll find many other combinations that include Cabernet Franc, Malbec and Petit Verdot. 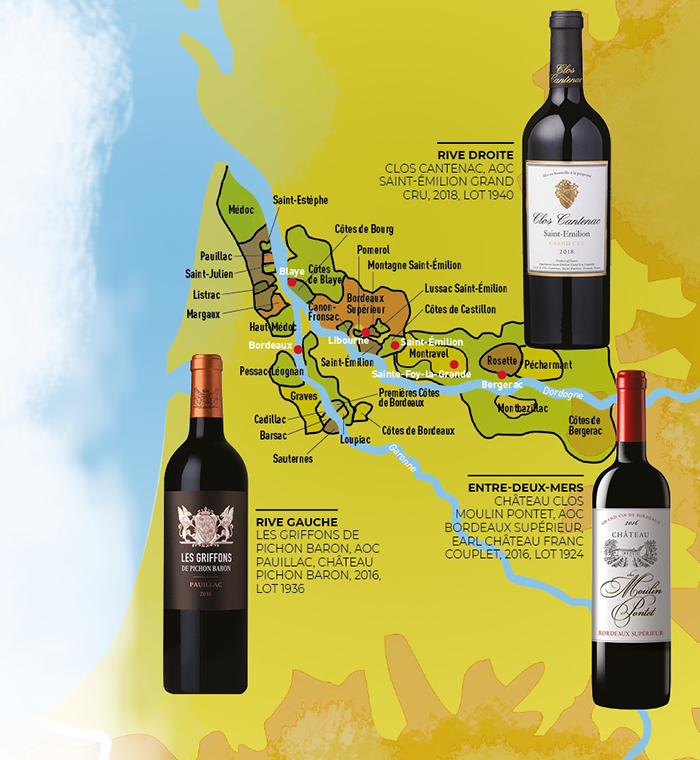 If you look at the map, you’ll see how the entire Bordeaux region can be neatly sub-divided into several distinct mini-regions. Bear in mind that while logic might suggest that “left bank” and “right bank” refer to either side of a single body of water, they actually refer to two completely different rivers, the Garonne and Dordogne. The city lies just north of their confluence, on the Garonne.

Left Bank Bordeaux refers to wines produced along the banks of the Garonne northwest of the city, generally Cabernet Sauvignons, while Right Bank Bordeaux are those originating from the vineyards lining the Dordogne river, usually Merlot. “Graves” are those produced upstream of the city on the Garonne. And Entre-Deux-Mers refers to wines that come from the area between the two rivers, before they meet at the Gironde.

“Médoc” Bordeaux are produced directly on the banks of the Gironde and often considered the crème de la crème of the entire region, although realistically there are far too many fine Bordeaux to limit one’s consumption to reputation or vintage. They all range from good to great to excellent with 57 appellations, including some very famous ones such as Haut-Médoc, Margaux, Pauillac, St-Julien and St-Estèphe, to name a few.

THE TERROIR MAKES THE WINE

Informed consumers will understand that the Bordeaux region is far too vast and complex in its offering to be described in detail, and that experts will always contradict one another.

When you consider that over 120,000 hectares are planted to Bordeaux wine production, and that over 6000 châteaux produce over 700 million bottles every vintage, you’ll understand that the wine in your glass will likely have been created in a tiny area—perhaps even in a single vineyard with its very own and very particular terroir.

As you explore the vast array of Bordeaux wines available, by all means allow your own personal taste to be your guide.