With a 200-year tradition of winemaking, New Zealand and Australia are fierce rivals. This match is too close to call.

ANNOUNCER: Today’s game calls for hot sun over the Aussie team vineyards. The Syrahs are certainly basking in its splendour! Over on the Kiwi side of the pitch, that sun is hiding behind low, humid clouds, making it nice and cool for the Sauvignon Blancs, just the way they like it. 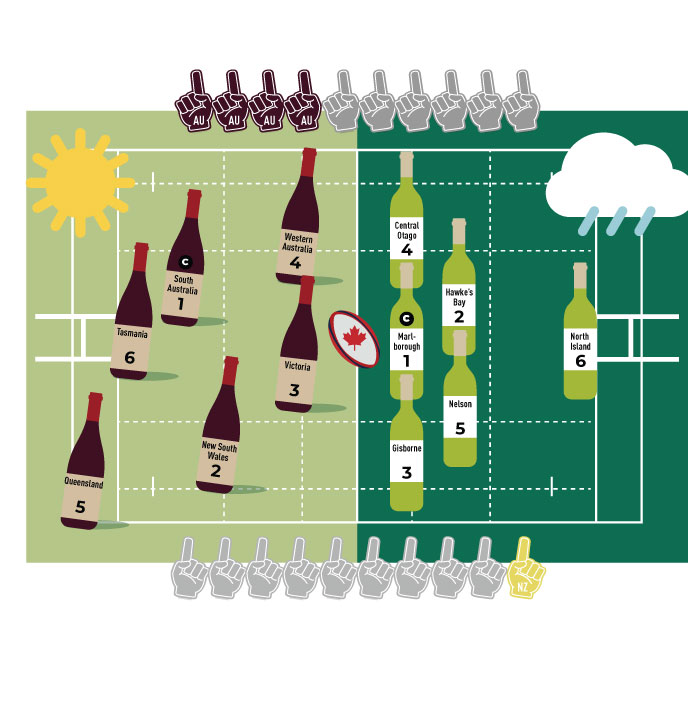 The players are looking fantastic! Australia’s top six wine region players are captained by their number one region, South Australia. They have new player Tasmania at the goal line, defending its cooler climate. He’s up against New Zealand’s own new goalie: sunny, tropical North Island. Malborough heads up a strong, organized team, but will the two countries’ very differing strategies help or hurt them?

Those NZ Whites are known for their restrained method, more like the French. They don’t go for crazy moves, these guys! But they could be overwhelmed by the Aussies’ experimental and high-tech approach. You never know what the AU Reds will pull. This year it’s Syrahs, next year it could be a blend of Syrah/Cab/Merlot!

And how about those fans! Aussies are diehard loyal, keeping 40% of their own bottles for themselves. Why recruit from abroad when your country produces such great players? Of course, they have a huge population of wines compared to the Kiwis. But those Kiwis know how to export their top talent—90% of them head abroad to quench palates around the globe.

And that’s lucky for us Canadians, who are super excited for this upcoming season. Who will win the cup? It’s too close to call: at this point in the game it’s 7% Aussie wines vs. 6% Kiwi wines sold in Canada. Can New Zealand tie it up this year? The end of the match arrives 16/12/19. It’s your call, Opimians—SCR-YUM!