Wine is basically fermented grape juice, so all wines should be suitable for vegetarians, right? Well, not always!

Grape juice is indeed fermented by yeast into wine. Natural sugars are metabolized into alcohol, carbon dioxide and a whole host of aromatic and non-aromatic components that contribute to the flavour and structure of wine. At the end of the alcoholic fermentation, wine is cloudy due to many compounds in suspension—think fresh pressed apple juice vs. clear processed juice. As wines are matured and prepared for bottling, some of these materials will deposit at the bottom of a wine tank so wines naturally become less cloudy over time and can be “racked” off their sediment. Centrifugation and/or filtration may also be used to clarify wines.

However, for wines to be crystal clear and stable without the risk of a haze developing in bottle, a process known as “fining” is sometimes necessary. This removes smaller protein molecules that remain in suspension in the wine. Fining agents are added which bind with the pesky protein molecules, facilitating their sedimentation. Rather than ingredients or additives, fining agents are processing aids which precipitate or are filtered out. They should not be present in the final wine other than in infinitesimally small amounts. Different fining agents have slightly different properties and are more or less suitable depending on the acidity, pH and tannin content of wine. Certain traditional fining agents are animal derived.

For white wines, isinglass often gives the greatest clarity. It is produced from fish bladders—”tasty” I hear you say! But it imparts no flavour to the wine, and in fact can enhance aromas and freshness. It is suitable for pescatarians but not for all vegetarians. An alternative for white wines suitable for vegetarians (but not vegans) is casein produced from milk. However, casein can strip some aromas and flavours from a wine so getting the dose spot on is important.

Bordeaux has a long tradition of fining with egg whites. In the past, six to eight egg whites were added to each 225-litre barrel. So many eggs were used in the region that the leftover egg yolks were used to make the specialty Bordeaux patisserie known as “canelé”—a small caramelised pastry crusty on the outside with a soft tender custard centre and flavoured with vanilla and rum. Canelés are now big business have become a symbol of Bordeaux—there is even a world canelé competition each year—but I digress. Few châteaux now use fresh eggs. Frozen egg whites can be used after defrosting, and egg albumin is also available as flakes or powder, although these react slightly differently with wine.

In some countries, fresh liquid blood mainly from cattle was used for many years. As you might imagine this practice is now illegal! Gelatin is an affordable and effective fining agent that also helps soften young, tannic red wines. It is widely used in the cosmetic and food industries. Derived from collagen, it is produced from the connective tissues, bones and skins of animals. Gelatin produced from peas and potatoes has now been developed.

All vegetarians will be pleased to know that more and more winemakers are avoiding using animal-based products where possible with a shift to using bentonite made from clay, which is suitable for both vegans and vegetarians. Better understanding of wine chemistry, aging on lees, refrigeration and filtration techniques have also helped. Opimian aims to increase transparency as to how its wines are made giving members the possibility of an informed choice by identifying wines suitable for vegetarians in Cellar Offerings with a logo: 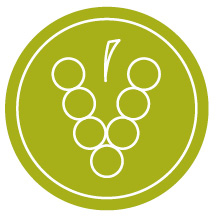 Oh, and don’t be confused by the term “meaty” to describe a wine—this is not an indication of its unsuitability for vegetarians, but a character that naturally develops in certain grape varieties and wine styles over time!